skip to main | skip to sidebar

I've always marveled at tales of the Ama, the Japanese women who specialized in diving for shellfish.  These fascinating women swam pretty much naked and were able to make a living and gain independence, mainly due to their superior ability to tolerate cold and to hold their breath for long periods of time.  Found a fascinating blog with pictures of these beautiful women here.
Posted by BrooklynMermaid at 9:10 PM No comments:

Ever since 20,000 Leagues Under the Sea, I've wondered what has crossed the mind of every open water swimmer: what lies beneath.

Not that Coney Island is the deep sea.  The first CIBBOWS years didn't prevent us from telling our own salty tales about the giant squid.

Bonaire they take the Kraken quite seriously, as a Dutch protectorate.  I had a lot of time during a long swim to thing too long about it. It seems now we are getting some answers.
Posted by BrooklynMermaid at 8:34 PM No comments:

For the swimmers who may want a closer look at the course outline chart background, and the surrounding areas, you can view the chart interactively at http://ny.usharbors.com/explore/harbor-guide/coney-island -from kayaker maestro Terry O'Malley

Posted by BrooklynMermaid at 3:13 PM No comments:

As a young girl my friends and I would look out the window and
pretend Breezy Point was England where we could meet the Queen.
After four decades of gazing out at breezy point, the day finally came when I could step foot upon that shore and swim home to Coney Island!
Lucky number 13, my neon yellow buoy, was tied safely to my wetsuit as I swam towards the first rubber motor boat in front of the aquarium.  We rode this boat to a magnificent larger boat,and shared our dreams about swimming as we drifted toward Breezy Point.  We jumped off near shore for a beach start.  As I started to swim I looked up and saw yellow buoys and brightly colored kayaks dancing upon silver waves.  An enchanted garden blossomed in the sea.  I even had my own personal kayaker, Larry, to guide me on my adventure.  I swam straight across towards Manhattan Beach, but the currents were pushing us towards Brighton Beach.  Larry reassured me that we did not have to circle the buoy near Manhattan Beach, and we continued straight to the White Building.  Memories of the Triple Dip swirled in my head as I swam along the rocks between Manhattan and Brighton Beach.  The current was in our favor all the way back to the aquarium.  I was able to relax and reflect on the four decades I spent on the shore facing Breezy Point.
Coney Island avenue brings thoughts of the old Brighton Beach Baths, my first lifeguard assignment at the shack, and my new home at Oceana. When I float by Brighton 6 th I reflect on my career as a teacher.  When I see the Tatianna restaurant I remember my proposal and wedding. Then comes our famous Grimaldo's chair, and all the lovely memories of his smile.  When I reach the jetty on West 5th street, I can see the building where I grew up, and that window where I first gazed upon Breezy Point.
The water was beautiful and I did not even want to exit at the aquarium....but then I thought of the frozen margaritas at Rubys.....party time!  Two magical hours in the ocean of aqueous bliss made my dream come true!! Thank you CIBBOWS!!!     -Lesa Schwartz

Capri's video of the End of Season Party 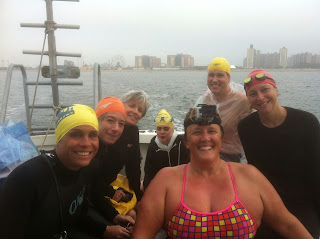 Posted by BrooklynMermaid at 8:58 AM No comments:

On August 13, 1879, Captain Matthew Webb, the first person to swim across the English Channel, swam from Sandy Hook to Manhattan Beach in just over eight hours. Morrison, 51, hopes to beat that time while swimming the course as Webb did -- entirely by breast stroke.

Morrison has done this before. On August 10, Morrison completed the 17-mile Rose Pitonof Swim from Kips Bay, Manhattan, to the Steeplechase Pier in Coney Island, using the breast stroke and setting a new course record for that stroke of six hours and 29 minutes.

Inspring and thought-provoking tale from the English Channel

Many thanks to those who wished me well pre and post my English Channel attempt. After some doses of Benedryl I’m feeling fine today. I always hoped when the day came for my first DNF that I’d handle it well, and I think I am. First, I honestly feel mentally and physically great and feel nothing but gratitude for Bob’s call. I’m blessed with not just a perfect hubby, but a solid reliable crew support. My entire experience has been nothing but great since I arrived in England. I’ve met so many wonderful people, swimmers and non swimmers. I’m leaving with new friends, and the knowledge that my new approach to mental and physical training did me well. I was feeling nothing but pure bliss for my entire swim, and I just felt so strong and positive. One of the last words spoken to me on shore by another channel swimmer observing for a relay team stuck in my mind – just relax and enjoy your channel experience. I did just that. When my observer looked at me with a WTF look on his face and said the water is 11. Bob nicely translated to – it is 51-52. I recall shaking my head no because I thought he was kidding. One toe hit the water and I said oh, wow he is serious. I stayed positive and let my body embrace the temp as I swam to shore to start thinking ah, mental training is paying off! I spent a lot of effort on cold water acclimation and felt confident. I started feeling fine, and embraced the temps by going out faster than normal. After that I could feel it get warmer, thrilled I was under 20 sec on feedings and peeing between feedings – my body was fine. I felt stronger than ever with boundless energy- even my tapering was paying off. I saw a few jellies early on under me and took in their beauty and reflected back on my first 2008 one mile ocean swim where I was freaked by the ocean and closed my eyes until the lifeguard startled me when he told me I was going in the wrong direction. I felt so thrilled I was now swimming over them, admiring them. I wasn’t worried about a sting at all. I was stung in Tampa so I knew it would hurt but I’d get through it. You learn something from each challenge to apply to the next. I saw few more and fine again. I couldn’t believe how awesome it was swimming in the channel, and how fast time was going between feedings – a sign of pure bliss. I last remember swimming through what seemed like endless jellies and thinking wow, so many and so cool. I felt the stings and said wow, not as bad as Tampa, must be cuz I’m numb from cold. I swam on and then suddenly I felt drugged, then left side of my body was doing its own thing and I recall trying to focus to swim through it but was really disoriented. I heard Bob’s voice and from that point I really thought I was chatting with them, but Bob said nope, unresponsive. In my mind I was swimming through it, but his vision had me not even rolling my head to breathe. It really wasn’t a bad experience for me since I was in la la land, but I’m sure I stressed poor Bob out and for that I’m sorry. He’s done nothing but support my goals 100%, and unfortunately he had to make a decision that I’m sure is hard for any crew to make. While this didn’t go as I hoped, I am really feeling good, strong and healthy today. I’ll now focus on my other work, swim and life commitments in the coming months and continue my English Channel training for a hopeful slot in 2014 season. Thanks again to all for their support. I really am leaving healthy, injury free, and content. I came here with no other ‘next’ swim planned because I said anything can happen, and I want to focus on the channel until I hit France and I plan to keep my word:)

Posted by BrooklynMermaid at 7:29 AM No comments:

More Than a Relay, Not Quite a Solo, Sandy Hook to Coney Island EPIC Test Swim with CIBBOWS